Once i decided to give Notepad++ a serious try as my default code editor the first major thing i noticed was the non availability of explorer like file browsing panel (generally to the left side). After a few bits of r&d i reached at the conclusion that Notepad++ had Explorer plug-in which could be installed with a few clicks!

Here’s how it had to be done:

2. It should list all available plugins which could be added to your current version of Notepad++ installed in your machine. Check plugin name to be installed, “Explorer” in our case and click “Install” (See image below). A download window should appear and download should begin automatically. 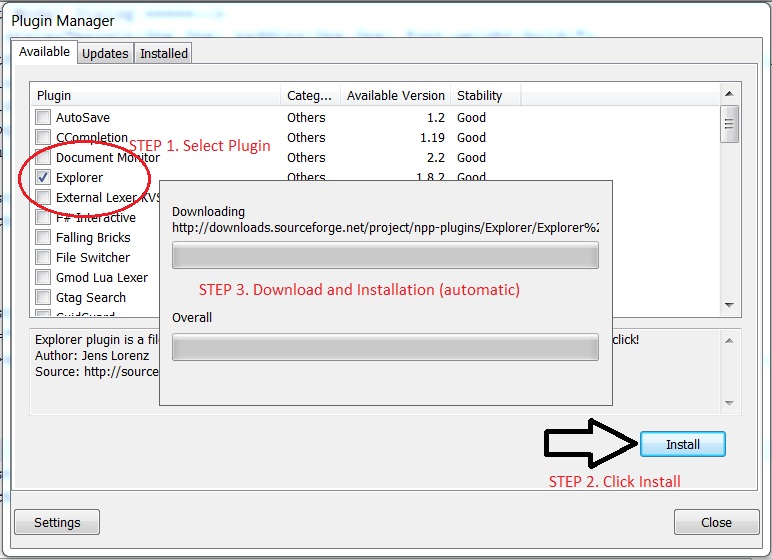 3. Once the download is complelte it asks you to restart the notepad++. Just restart it and check your Plugin tab now. It should show “Explorer” listed there.

NOTE: Before installing it succefully i had problems installing it. After automatic “download and install” (in step 2 above) when i restared notepad++ the plugin would’t appear at all. There might have been some bug in the previous version or don’t know but when i went to “Install” the plugin it kept me asking to Upgrade “Plugin Manager” first. Even after i updated it twice it kept me asking to update Plugin Manager first. To fix this i un-installed the previously notepad++ and downloaded a fresh copy and installed. Thereafter i performed the actions which i have listed above. So, if you face some problems with update plugin manager like sort of issue and/or not appearing the installed plugin consider re-installing the notepad++. Just a note on it. Thanks!